Having a whale of a time - well, not all of us!

Today's blog is about School on the Mat again. We were on our own today and sadly Ann missed out the afternoon because she was not very well. We think it was too much heat and having taken the afternoon off she is recovering slowly. Please continue to pray for her and indeed for all of us as the heat takes no prisoners!

Fiona put together a programme based on the story of Jonah, with the puppet and some games. The children had to stick Jonah inside the drawing of the whale whilst blindfold and they all wanted a shot. Nearly all succeeded except the one who tried to pin the whale on Malcolm. He was a moving target at times, but the kids loved it.  We used emojis to show the children how Jonah would have felt at different stages in the story; we asked the children if they could make the faces, tired, surprised etc, but they couldn't grasp the idea we wanted. This afternoon we were in a village near Sok San and did the same programme without trying to do the faces; we simply showed the pictures!

Hot potato has proved to be a very popular game. It is a pass-the-parcel kind of game with a bean bag; there is nothing to unwrap. If you are left holding the bag when the music stops, then you are out. They laugh about being out, with no complaints, but still make sure that the right person  has to go.

Malcolm has discovered a second career as a children's entertainer; the balloons he was holding as traffic lights were a big hit, as we're those he gave out. One little girl was not happy with life, but the balloon stopped her crying and made her smile.

At lunchtime we met Jeff Henneforth. Jeff is from Los Angeles, who had just arrived in Poipet when we were here in 2010. He stays here now and is the pastor of a small church. It was good to see him again and chat about Poipet and his ministry here. He confirmed many of our impressions about the changes taking place here.

Pray for us. Tomorrow will be much of the same routine and we will give you more news and pictures then. 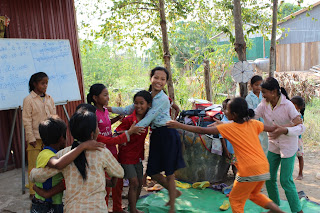 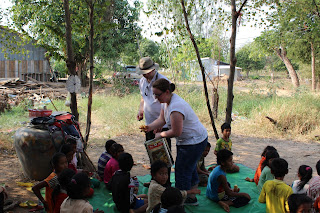 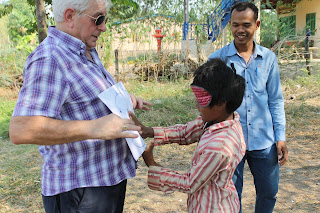 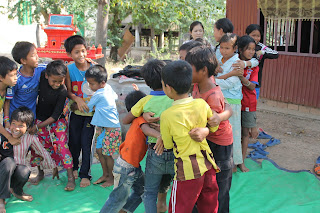