Listen to the text

There was a slight reshuffle of the teams today as Martin joined Jim to sit in on the preaching seminar being run with the CHO leadership team. This meant that after devotions this morning, which Martin led, looking at the story of Philip and the Ethiopian from Acts 8 and the opportunities which God provides us to share the Gospel message, Fiona, Malcolm and Ann headed out to School on a Mat, where they ran activities looking at the story of the prodigal son.

Meanwhile Jim was continuing his preaching series. This morning started with a look at the story of Jesus meeting the samaritan woman at the well (John 4), which prompted an interesting discussion amongst the group about the role of women in the church, with the CHO team asking about the fact Jesus' disciples were all men but he spent so much time with women and Jim explaining that this story and others show that Jesus believes that everyone is equal, male or female. During our time in Cambodia we haven't seen any examples of discriminatory behaviour towards women and this was backed up by a conversation with Rosa on the drive back to the Destiny Cafe where he confirmed women and men are treated pretty equally in Cambodia.

The afternoon session saw us looking at the crucifixion story from beginning to end to help them be able to preach on it in future. Again, the session was interactive with contributions from the team throughout. They seem to have found the sessions useful, with one pastor telling us that they were planning to keep Jim! So there might only be four of us returning this weekend!

We can't believe how quickly the time has gone, with only a couple of days left with CHO. Tomorrow normal service is resumed with Martin rejoining the School on a Mat team along with the Tearfund team and Jim running the final day of his preaching seminar.

The title of today's blog caused a great deal of confusion yesterday. Jim put the phrase "listen to the text" on the board as a strap-line, but it made no sense in Khmer. There was a great debate about it and Rosa's task is to translate it into Khmer in a way that does make sense and then tell Jim what it is! This is the starting point for all preachers and we need to find a way of giving them this kind of  a way that they understand. Translating language is fascinating: Psalm 23 here should start "the Lord is my cowherd" because there are no sheep here but plenty of cows. 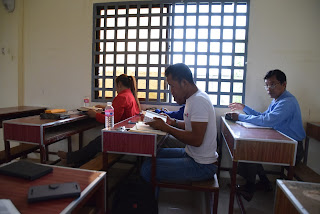 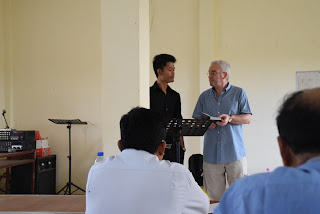 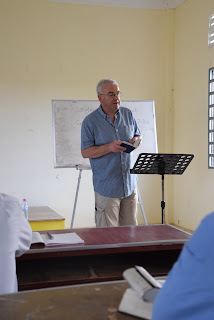